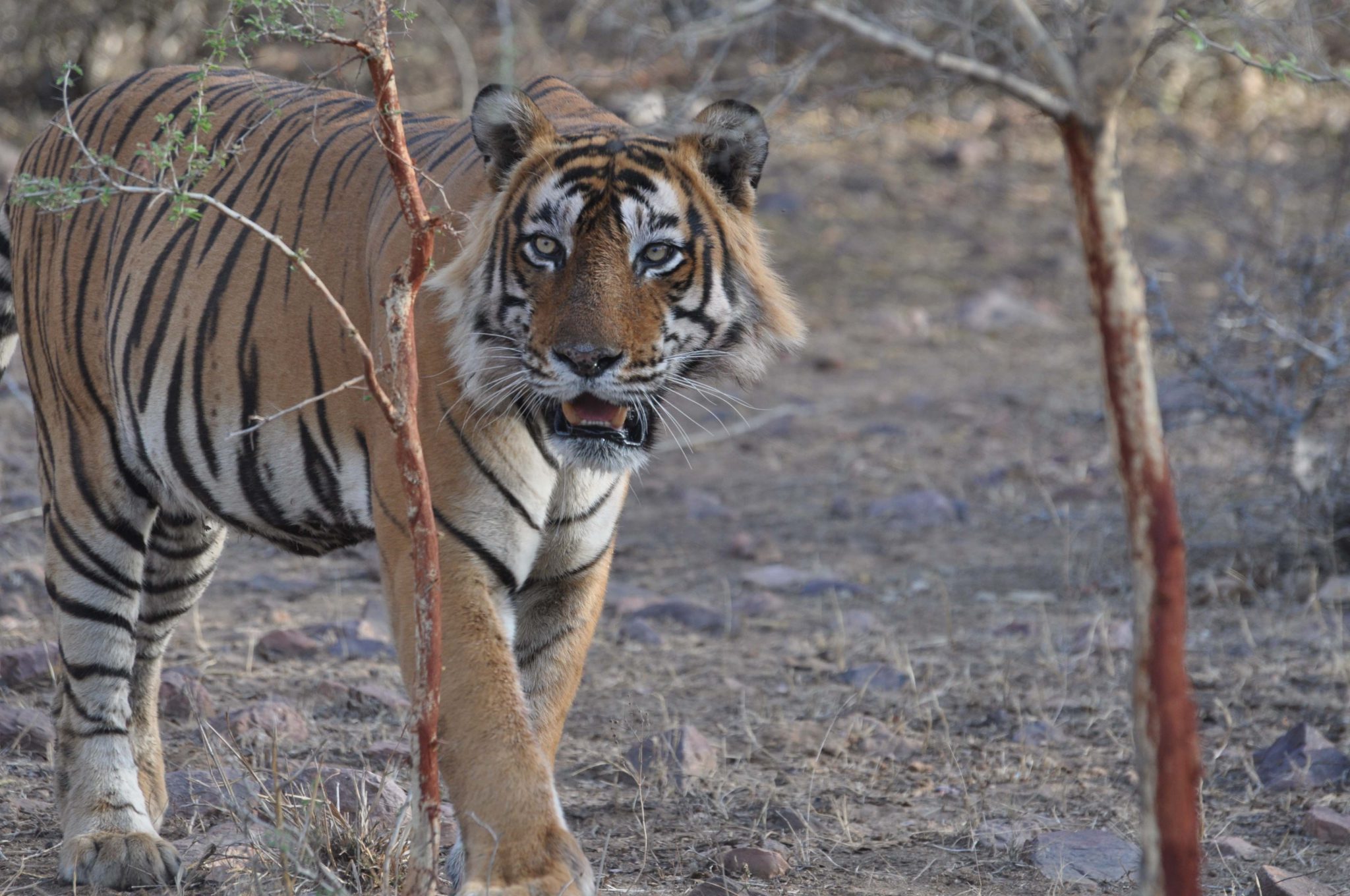 Pioneering Indian conservationist, wildlife expert and good friend of Wildfoot Travel, Harsh Vardhan is coming to talk at the Rutland Birdfair this August.
Ahead of his trip, we caught up with him and asked him a few questions, to find out exactly what he’s been up to and what his plans for the future are.

If you are coming to the Birdfair, make sure you don’t miss Harsh’s talks:

18 Aug Friday 2pm ‘Great Indian Bustard’ – only 90 left in the world, what’s next for this amazing iconic bird.

20 Aug Sunday 2pm ‘Indian Tiger population increases’ – a good news story. But do tigers have a place to go?’

After the lectures Harsh will be on the Wildfoot Stand to meet anyone interested in visiting India.

1.     At what age did you start to feel that something had to be done about conservation and wildlife protection within India?

A: In 1969-70, when the IUCN General assembly met in New Delhi and the crisis over Tigers erupted . India’s Prime Minister, Indira Gandhi banned Tiger hunting in 1970 all over India. So emerged Project Tiger. “An impossible project” we all thought!
As it rolled on, I tried to attend most meetings. I read all about wildlife and as a journalist I commenced reporting wildlife conservation.
I covered the visit of Prince Bernhard of the Netherlands to Ranthambhore in 1974, at the time he was President of WWF – International.
My news item went round the globe within hours and the die was cast.
Prince Bernhard observed a Tiger and a leopard sharing the same kill at 10 pm in the park in the peak of winter and we all shivered as we watched the scene through torch lights fixed to the engine of a jeep!

2.  What are the most important conservation and wildlife issue in India today?

A: The needs of our population creates a huge amount of pollution. The natural habitat is disappearing and finding a solution seems to be a low priority. Things are improving but only at a snail’s pace thanks to layers of bureaucracy (a legacy left by the British).

3.  You are a major force and campaigner for Indian birds and wildlife, what is the good news to come out of India at this time?

A: Science has been a priority in conservation for the past two decades. Tiger Conservation is an iconic success for India in the eyes of the world. There has been global cooperation from WWF, BirdLife International etc., which has helped us to gain ground.
Yet all this is simply a drop in the ocean, the force of Indian non-government organisations (NGO) is fierce. Each one keeps a vigil over wild species and each on is willing to take a stand against authorities who are in the wrong. These organisations are spread all over India, though not networked yet they are doing a very good job individual.
I myself am an NGO.

4.     We know you will be giving two lectures at Rutland Bird Fair this year in August, one on the Ranthambore Tigers and the other on The Great Indian Bustard looking at the future for both species.
Can you see a positive outcome for the survival of the Bustard Harsh and the growth of the numbers of Tiger in India?

A: Bustards: India started its conservation in 1979-80 when I successfully prevented Arab Sheikhs from carrying out illegal falconry in the That desert.
The Bustard conservation was started and inviting overseas experts, we held the first ever international symposium on Bustards in Jaipur in 1980.  We produced a book “Bustards In Decline.” But the bureaucracy and the damned  forest officers paid little attention, so the Great Indian Bustard was driven to the brink of extinction. The population has plummeted from 1,300 in 1980, down to only 90 today!

Hue and cry has been our lone defence. 2017 saw a meeting in Jaipur attended by experts from  Britain and  Spain to decide on captive breeding of the species in the Desert.  I  attended the meeting but a strong section of the government did not want me to be included. They thought I was too harsh and too critical, so they tried to keep me out but I went to the meeting anway .

We live in hope.  The habitat has been better protected for the past 4 years in the Desert, by the same set of forest officials who were doing nothing earlier, so officials can improve. 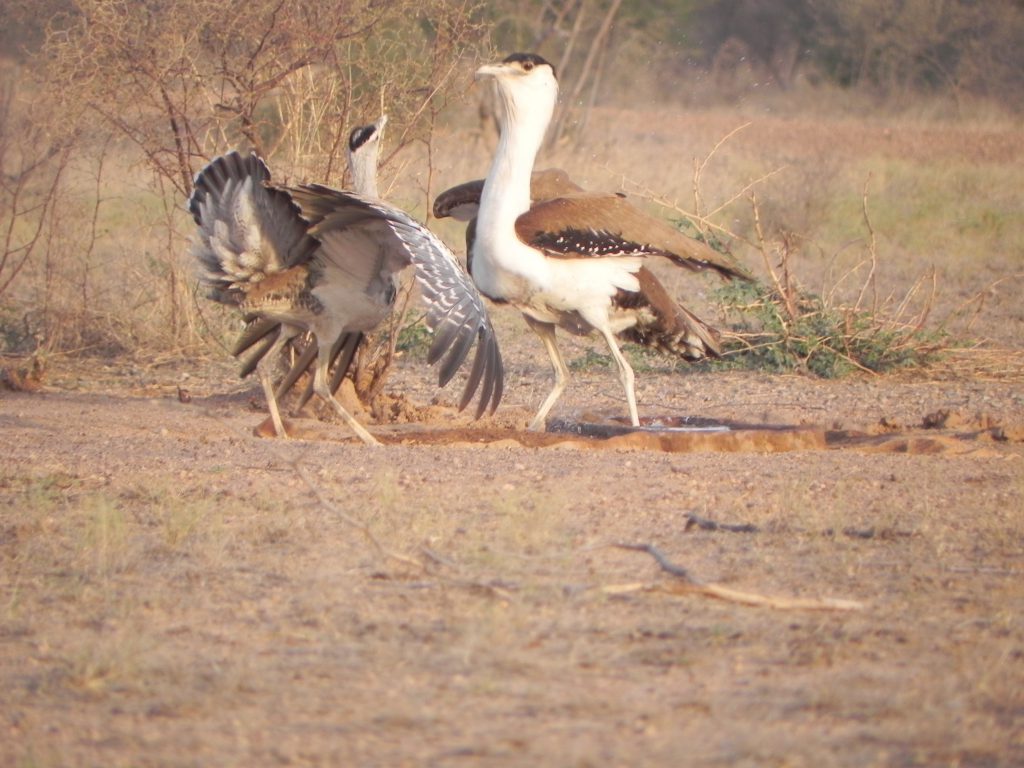 A. Tiger: Ranthambhore Tiger Reserve is overflowing with cubs. Nine females have cubs at present (July 2017)  or about to become adults or are pregnant.
We have nearly 68 Tigers compared to only 14 in 1994.
They are moving out of the park. Adult male cubs go out, as the dominant males do not allow them to remain inside (psychologically not letting them mate with own mothers too).
They go out and live in scrub areas with no natural prey. So they prey upon cattle, which makes the villagers unhappy . The forest officials have no plan to deal with the excess tiger population. They say it is a success but we say ‘yes it is a success but the excess population is getting decimated in areas where there is no Tiger Management’. 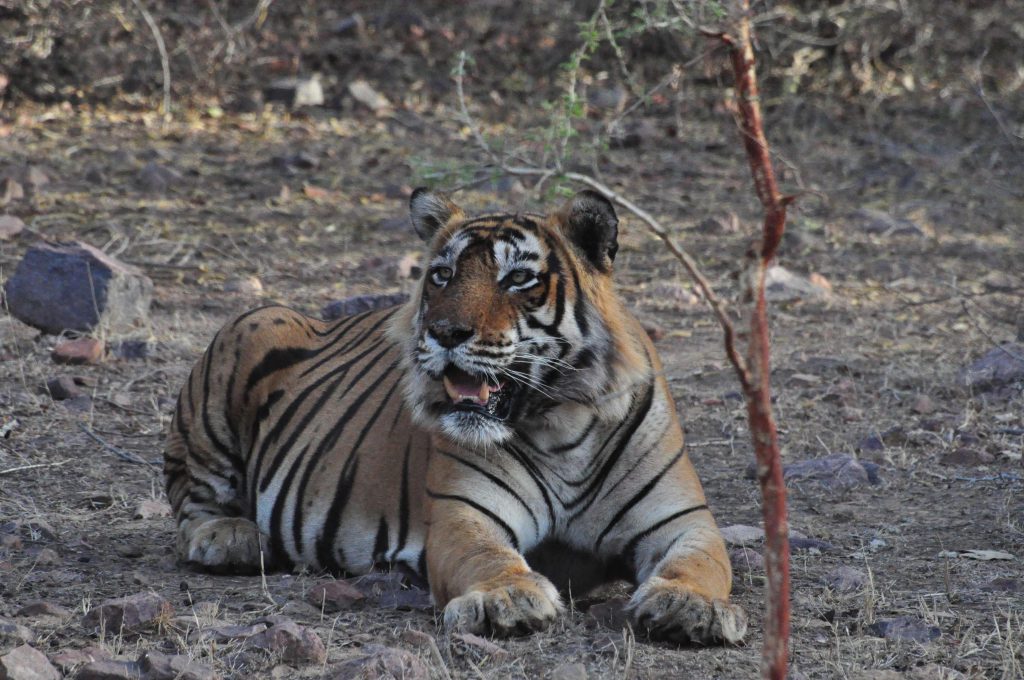 5.     You have edited, co-written and authored various wildlife, birding and conservation books in the past. You are working on about an Indian tribe called Bishnois – Can you tell us more about the book and its subject?

A: More than 500 year old success story .
Bishnoi Sect (not a tribe), were born in the desert and live by 29 principles, nature conservation being one of them.
Of the million people on earth who are Bishnois, one fifth of the them live in Jodhpur, the gateway to the desert.
They give away their lives to protect gazelles and black bucks and what do they receive  a double column piece in the daily newspaper!
I’d like to revive the spirit of the Bishnois and make it as widely acceptable as possible.
Flora and fauna both are for humanity’s welfare, and should not be confined to one community or a single country. The Bishnois were the first ‘Hug The Tree’ movement starters. In 1730, 363 men and women gave away their lives at Khejreli (near Jodhpur) when the prince wanted to cut trees to burn lime for a new palace to be built. Four such self sacrifices have occurred around that area since.
We all should take their exemplary examples forward. The book is to outline all this in a broader context including other communities across the world involved in similar initiatives. There is a long way to go.

6.     How can our wildlife and conservation community from all over the world support Indian wildlife campaigns especially the ones you are involved in right now?

A: By joining hands together, arriving at consensus and assuming the lead role in fields. Not merely as academics, or confined to face-book items and pep talks over dinner. Together we can make a difference.
Look at Wildfoot Travel’s and Simon Rowland.  We were unknown until a year ago Today, Simon is taking the the lead and putting us on the map. Now we need a thousand more Simons dotted around the UK.

7.     Your love of wildlife has no doubt rubbed off on your children and also your grandchildren and I know you are very close with them. Do you feel there’s a growing wildlife and conservation movement within the youth of India today?

A: It is Incredible. 21 years ago, inspired by my first visit to BBWF when Tim Appleton MBE (One of the founders of Rutland Bird Fair) took me around Rutland in a golf cart, my eyes were opened and I decided to have a Birding fair at Man Sagar lake at Jaipur to conserve it.
The Officers laughed at me, some laughed and said – ‘he has no money but he talks big!’ The Birding Fair will be 21 in Feb 2018, incurring a few million rupees expenditure.
I knew people s would not join it, so I lured students-teachers community.  Not an exaggeration, we have a quarter million constituency of students-teachers  who support conservation. At each walk, some one says hi to me, so I ask them who they are, they answer “sir I attended 5 or 7 birding fairs, now I am an engineer or a doctor!”
Lake restoration was our biggest success. People had to use a handkerchief by 2006-07 as they would walk by this 1.5 sq. km lake, But not today. Thanks to an eco system, based approach the heritage lake got conserved but the same lake is once again getting degenerated – the government, has different ideas.
I am currently pitted against the present Chief Minister, she is imperious but I am willing to go to jail if she can pronounce a sentence from her side, which she cannot!

8.     Simon tells me you are a very modest person Harsh, you are always committed to highlighting “the cause” rather than yourself. You have been associated with fierce & sometimes overwhelming conservation struggles within India. What’s next for Harsh Vardhan and what’s close to your heart right now?

A: I have handed over leadership to the next generation and I am trying to ensure they do better than I could.
We had  no volunteers 20 years ago. Today there are about sixty volunteers and a core team of ten. They provide technical inputs, leadership and support.
So the ‘White-naped Tit’ work is led by them. I take a back seat. This bird is rarely observed and only in 6 – 7 places in arid India. It is found about 15 km away in the hills from where I live.
Writing a book on the Bishnois, a profile of wetlands etc. are high on the agenda for me, hopefully they will progress nicely.
The Oriental Bird Club, run by Krys, a Brit, will soon mention the White-naped Tit. Krys informed me yesterday as I introduced Sajal Jugran, next in command here with me, to join hands with Krys. Why just me alone, they should all be involved.

9.     What are your five “must see” wildlife locations of India?

A: Of a total 50 Project Tiger Reserves in India designated so far (2017), only 5 can actually show you Tigers. Ranthambhore, Bandhavgarh, Kanha, Pench and Tadoba.
Others are not well managed and are facing problems from terrorism or do not offer basic facilities to vsitors
It is difficult to single out a must see five. I am more emphatic on habitat conservation, I have never been a botanist but my emphasis for the past decade has been more on vegetation, edible and non-edible grasses. if cattle are fed well, there will be less pressure of grazing on forests so forest species shall survive better.

10.  We are hoping you will be expertly leading small groups for us in the next 24 months, with a focus on the Indian Tiger, Leopard, Asiatic Lion, Birding, off the beaten track India and also with a little culture thrown in.  What can we expect from these unique itineraries and what exciting spectacles do you have in store?

A: India has limitless attractions. There are few people who have the skill and knowledge to make sure you get the most out of an indian Wildlife experience.
I can offer A mix of Tigers, Birds, Bishnoi and Culture within two weeks. Visitors need authenticity, simplicity, no show business, and an easy pace with plenty of time to observe the target species.

Check out  this captivating video of a tiger shot by Harsh’s son and fellow Wildfoot Ambassador Manoj Varhan.