The elephant seal, as you can imagine, is named because of its likeness to the traditional elephant. As well as being an extremely large animal, elephant seals also have huge noses that closely resemble an elephant’s trunk. These enlarged noses serve an important genetic purpose. Males use their noses (known as proboscis) during the mating season. These trunk like noses allow them to roar louder when attracting females. This is why the proboscis only starts to develop when the seal pups reach sexual maturity (between 3-5).

Prior to this, elephant seal pups are a particularly cute animal and well worth braving the Antarctic weathers to see close up. At birth these pups possess a sleek black coat which molts after about a month to reveal a silver-ish coat, another year later this coat turns brown and stays this colour. What makes elephant seals so adorable is their almost human features. Big large eyes and a broad round face, quite different from the elephant like creatures they develop into. 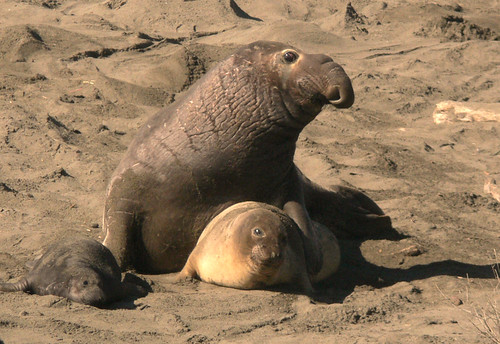 In terms of size, an adult male elephant seal can be over 20ft (6m) and way up to 8000lbs (4000kg). The females can be a lot smaller reaching only around 10ft and weighing roughly 1500lbs. Elephant seals thick skin and fur allow them to bear the freezing conditions of the Antarctic by providing insulation. It is also worth noting that elephant seals continue to molt their skin even in adulthood. Once a year (however never in mating season) the elephant seals must return to land to shed their own skin and only leave when the process is complete.

This renewal of skin is important as it ensures the seals are best prepared for hunting. Unbelievably, an elephant seal spends around 80% of its life in the ocean hunting their prey (eels, fish, octopus and even small sharks). They can reach depths of up to 500m and can hold their breath underwater for over two hours, the longest of any water based mammal.

As the elephant seal spends so long in waters, it is truly a spectacle to behold watching them on land. One of the best opportunities you will get to see this is during their mating season. In mating season, males battle each other for dominance to attract a harem of females, usually numbering around 40-50 seals.  After mating season, females give birth to their pups and nurse it for around a month, in this period the female won’t eat at all, instead both mother and pup live off the energy from her blubber.

The elephant seal is a truly fascinating animal and seeing it will be on many people’s bucket list. Luckily, the aggressive hunting of elephant seals has been curtailed and populations have increased due to legal protection which will allow more people to observe the elephant seals up close.

find out about our expedition cruises to Antarctica here