This Polar Circle and Antarctic Peninsula cruise will take you further south of Antarctica, crossing the Polar Circe. This expedition cruise passes through waters travelled by Humpback, Minke and Fin whales. Anchoring in various spots around the region, the expedition offers the chance to hike, and dive in the iceberg-heavy waters. 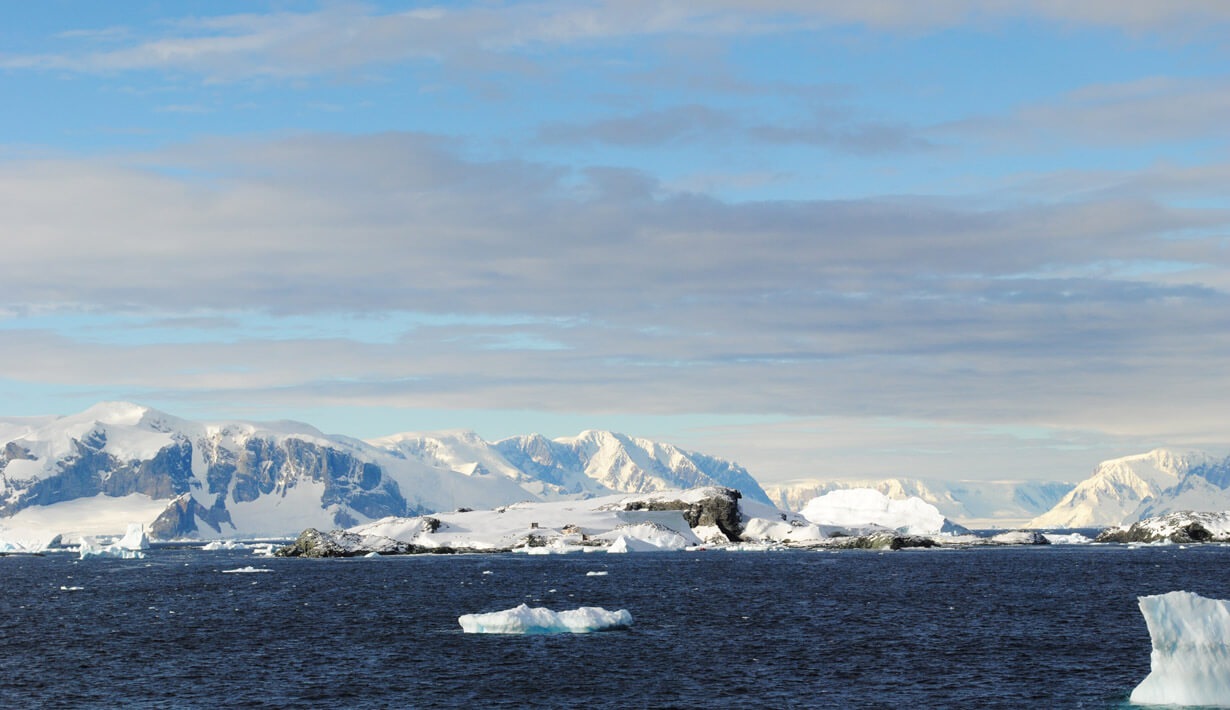 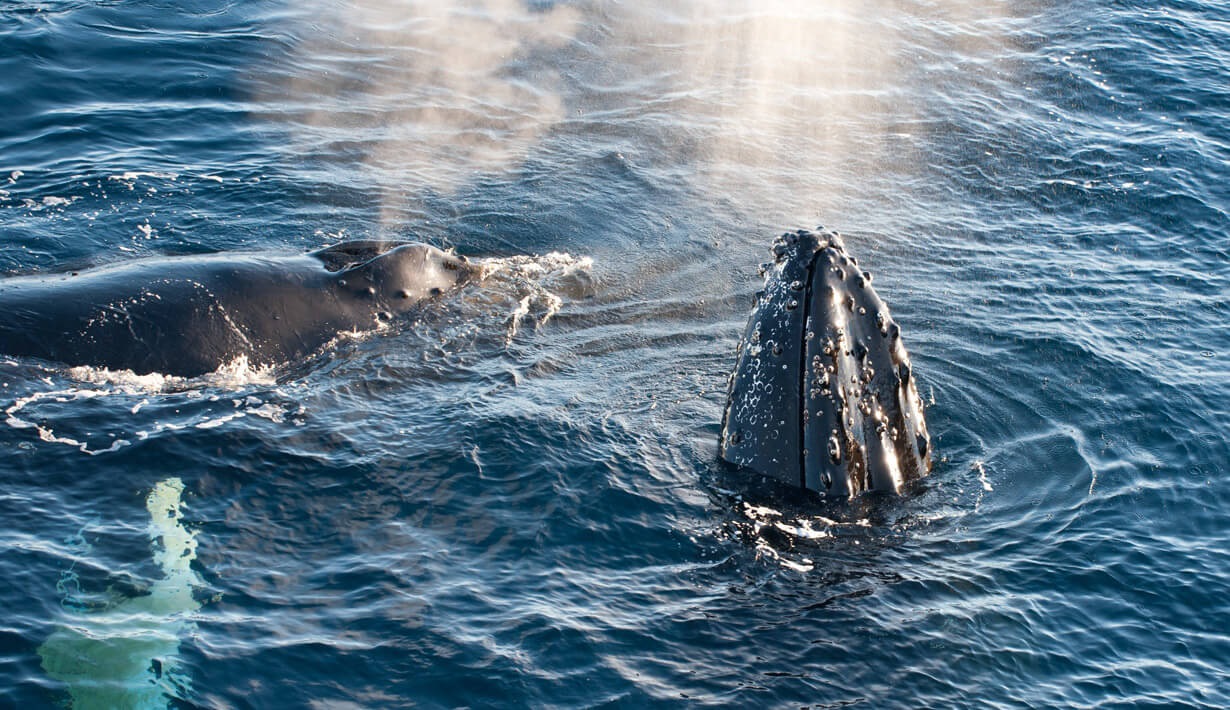 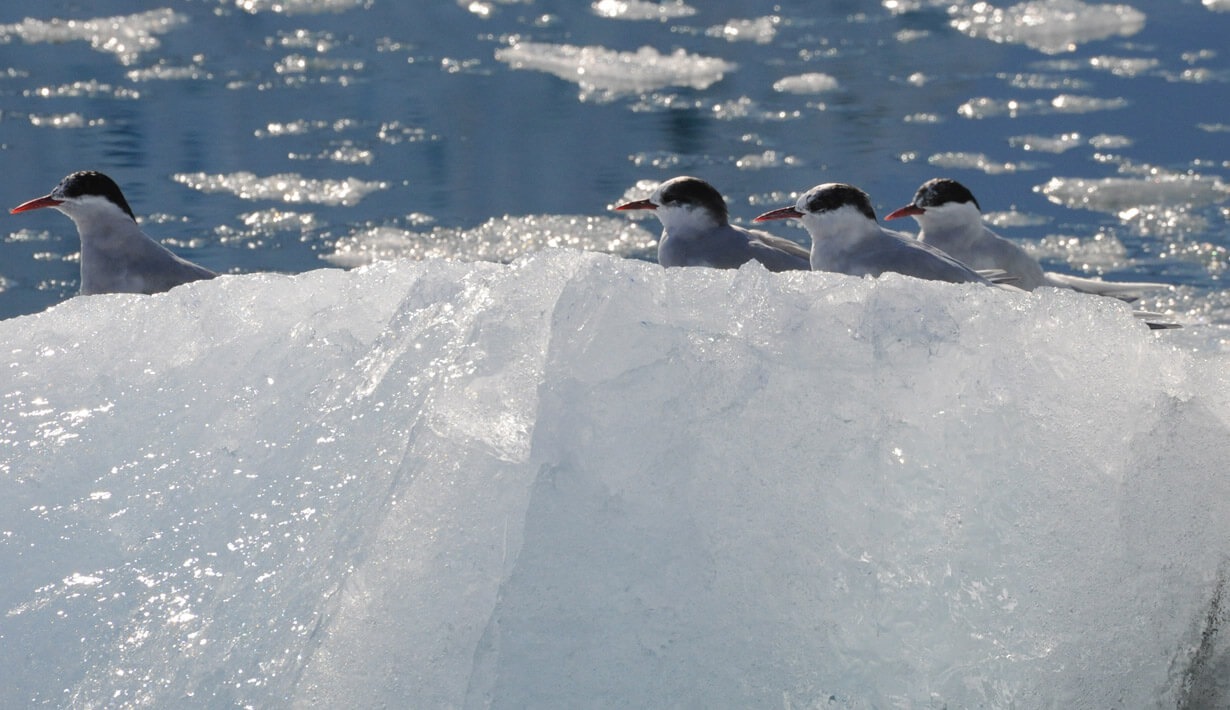 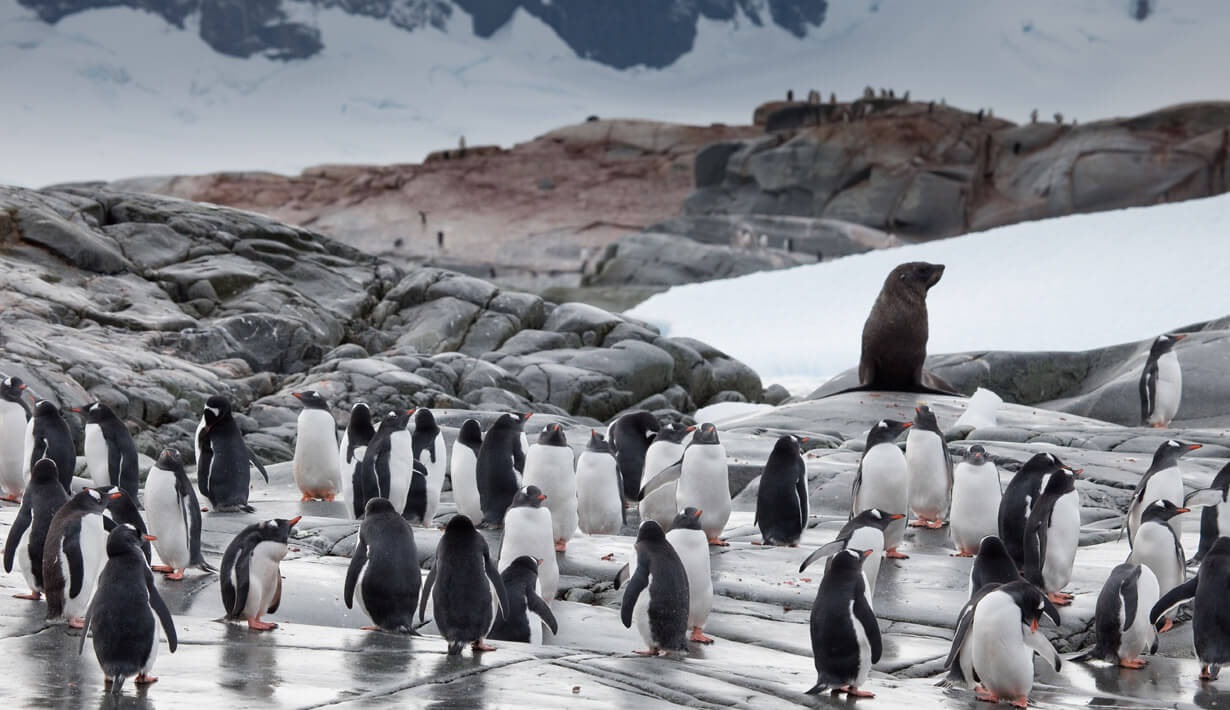 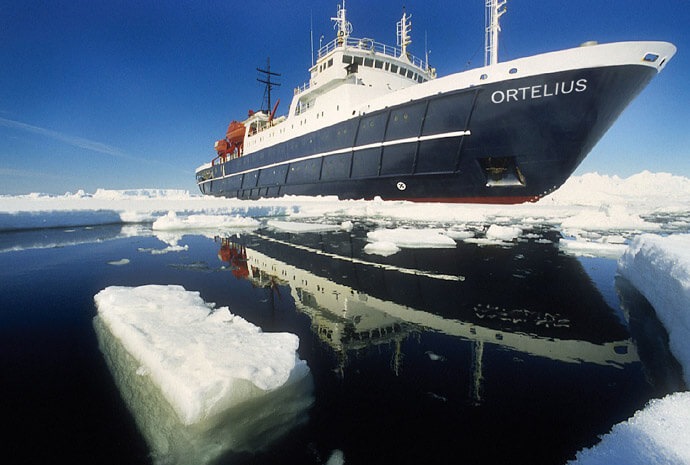 In the afternoon, we embark in Ushuaia, Tierra del Fuego, Argentina, the southernmost city in the world located at the Beagle Channel and sail through this scenic waterway for the rest of the evening. 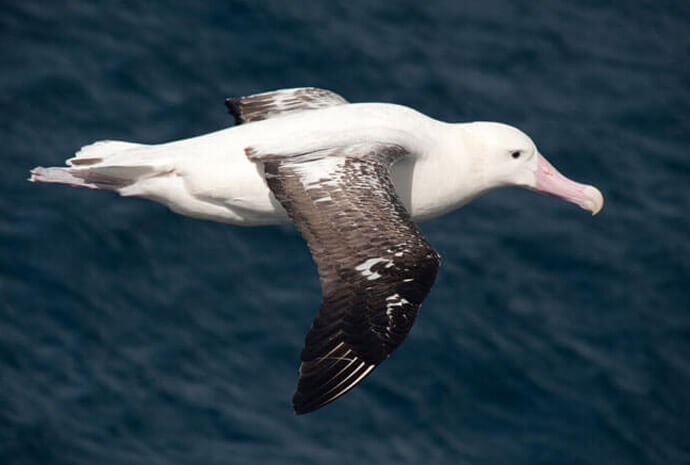 During these two days we sail across the Drake Passage. When we cross the Antarctic Convergence, we arrive in the circum-Antarctic up welling zone. In this area we may see Wandering Albatrosses, Grey Headed Albatrosses, Black- browed Albatrosses, Light- mantled Albatrosses, Cape Petrels, Southern Fulmars, Wilson’s Storm Petrels, Blue Petrels and Antarctic Petrels. Near the South Shetland Islands, we spot our first icebergs. 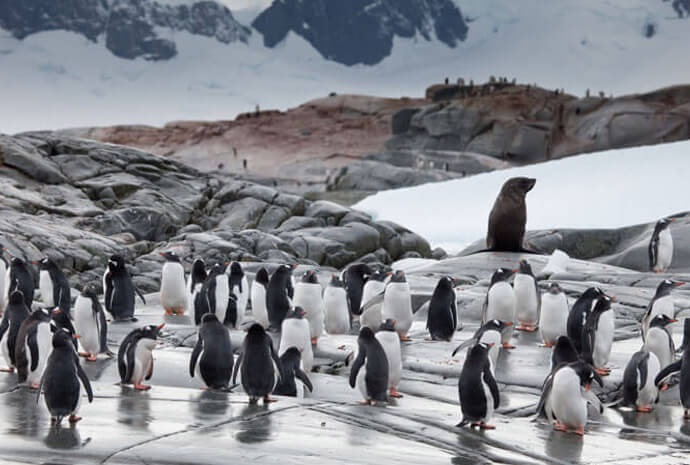 We will sail directly to “High Antarctica”, passing the Melchior islands and the Schollaert Channel between Brabant and Anvers Island. The Antarctic Peninsula is famed for its icy beauty and bountiful wildlife. During the days here, we will optimize the experience to get the best of everything.

Sites that may be visited include Cuverville Island, a small precipitous island, nestled between the mountains of the Antarctic Peninsula and Rongé Island where we will find a large colony of Gentoo penguins and breeding pairs of Brown skuas. In Neko Harbour, we may have the opportunity to set foot on the Antarctic Continent in a magnificent landscape of huge glaciers calving at sea level. Zodiac cruising offers a spectacular way to enjoy the landscape surrounded by ice incrusted alpine peaks.

In Paradise Bay with its myriad icebergs, we may have the opportunity to set foot on the Antarctic Continent. Again, we may offer an opportunity for a zodiac cruise in the inner parts of this amazing waterway. In this area we have good chances to see Humpback whales and Minke whales before heading south though the spectacular Lemaire Channel.

After a long night of sailing west around the myriad of islands south of Lemaire Channel, we find ourselves near the Antarctic Circle. If ice conditions allow, we hope to sail through the narrow The Gullet between Adelaide Island and the Continent with spectacular scenery all around. We hope to get permission to land at Rothera, which is the primary British research station in Antarctica. Alternatively we explore the area and make a landing one of the many islands in the area.

Depending on the ice conditions, we may circumnavigate Pourqoui Pas Island named after the ship of the famous French explorer Charcot. The area is spectacular with narrow fjords and high mountains with cascading glaciers all around. On Horseshoe Island we find the former British Base Y from the 1950s, which now stands unmanned but almost fully equipped from the time it was in service. Stonington Island is home to the former US East Base (1939-41) and later the British Base E. Base E was occupied until 1975. We may attempt a landing here which will also mark our southernmost landing site of the trip. 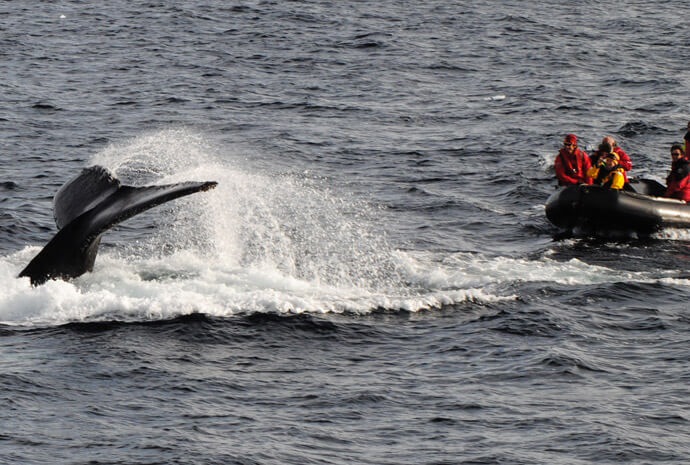 In the morning of day 9 we aim find ourselves near the Antarctic Circle once again as we head north into Crystal Sound. We have an excellent chance to see Humpback whales here as we approach Fish Islands for a Zodiac cruise and possible landing. As always, the scenery is unparalleled in beauty and we may well see more Adélie penguins among the myriads of icebergs large and small. Petermann and Pléneau Islands offer a great variety of bird life and some excellent opportunities to Zodiac cruise amongst icebergs with good chances to see both Leopard seal and Crabeater seals. Minke whales and Humpback whales are also often spotted in this area along with Gentoo penguins and Leopard seals. Further north, we reach the Melchior Islands; a beautiful landscape with icebergs, where we may encounter Leopard seals, Crabeater seals and more whales. From there we depart into the Drake Passage around noon. 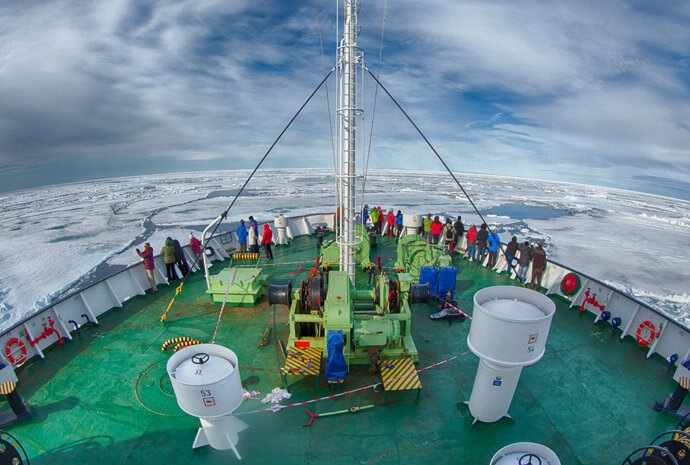 On our way north we are again followed by a great selection of seabirds while crossing the Drake Passage.

We arrive in the morning in Ushuaia and disembark. 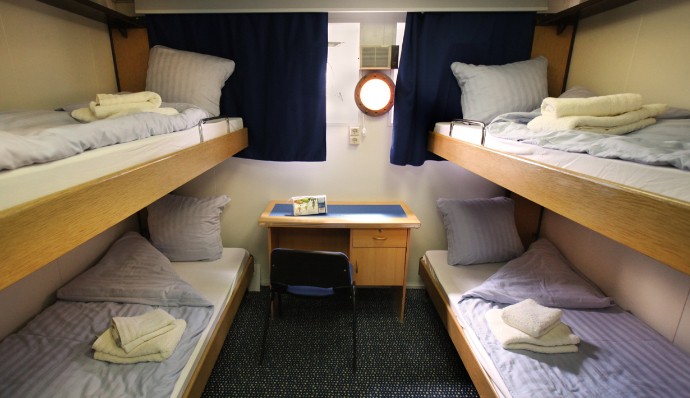 Ortelius was built as a Russian scientific survey ship with ice strengthened hull, ideal for polar sailing. She has been completely refurbished and has a selection of suites and cabins with windows or portholes and either private or shared facilities. There are twin dining rooms, lecture room, bar and observation lounge and lots of open deck space plus an open-bridge policy. Ortelius also has a helicopter landing pad and helicopter excursions are available on some itineraries. 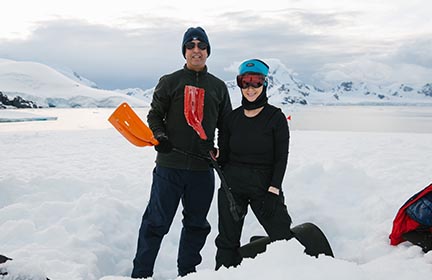 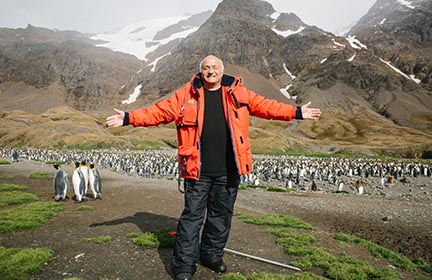 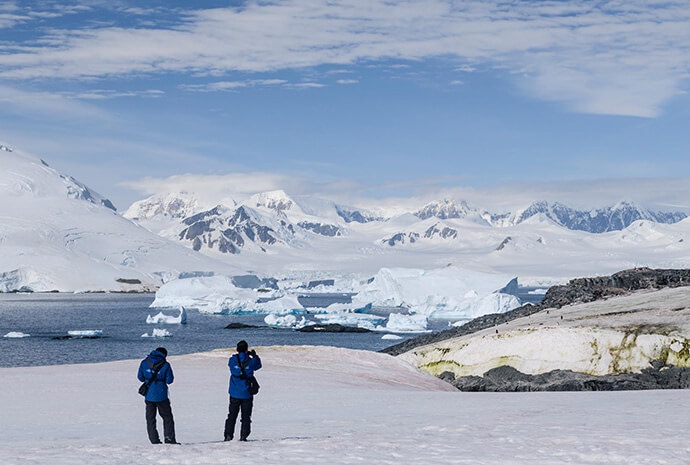 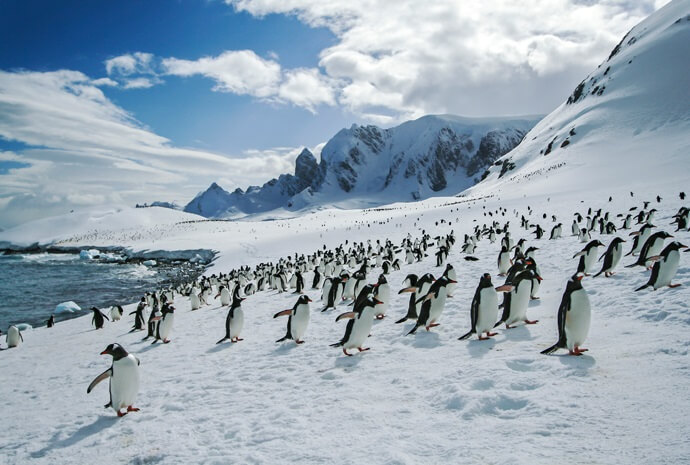 This classic extended Antarctic expedition offers an in-depth discovery of the magic of the South Shetland Islands and the Antarctic Peninsula with da... 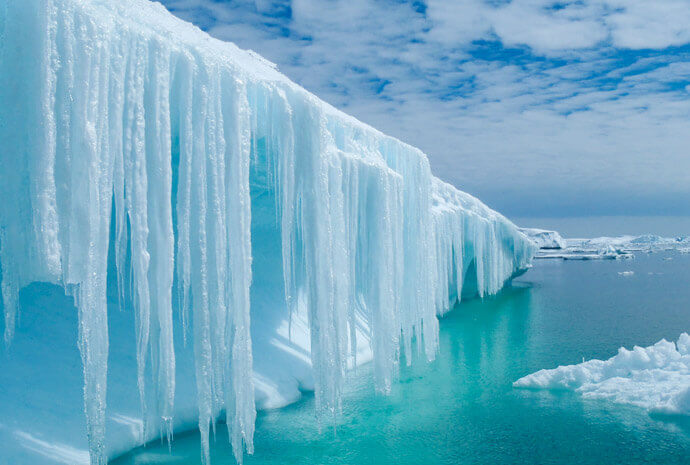 Quest for the Antarctic Circle

This special Antarctic expedition not only introduces you to the magic of the South Shetland Islands and the Antarctic Peninsula, with daily opportuni...