Photo courtesy of novemberkilo(CC ShareALike) This post aims to offer an informative look at the weird and wonderful Euphausia Superba, or Krill as they are better known. What are Krill? Krill are a shrimp like creature resident to the Antarctic with an average lifespan stretching between 2-6 years. They can grow to about 6cm in […] 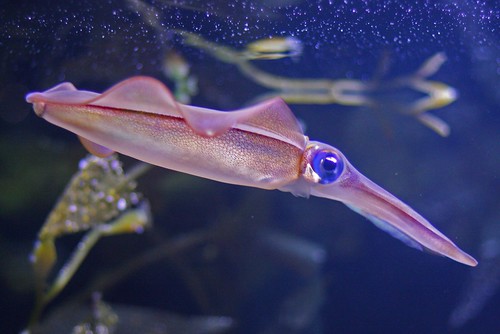 This post aims to offer an informative look at the weird and wonderful Euphausia Superba, or Krill as they are better known.

Krill are a shrimp like creature resident to the Antarctic with an average lifespan stretching between 2-6 years. They can grow to about 6cm in length and are very capable swimmers, so much so that they are often mistaken for little fish rather than a form of plankton. Within the Antarctic, krill are usually found floating in clusters that can contain up to 10,000 krill per cubic metre. These krill swarms can vary from anything from a few metres to over 3 miles in length.

The origin of the word Krill comes from the Norwegian word meaning ‘Whale Food’ which hints at the crucial role they play in the regulation of Antarctica’s food chain. Put simply, without the important role played by krill, many animals within the ocean’s food chain simply would not survive.

What do Krill Eat?

Krill have a varied diet but certainly not one that would appeal to you or I. Krill largely eat fish larvae or single cell plants such as algae, copepods or zooplankton. This being said, krill have at times been observed eating other krill.

Unfortunately for krill, it would appear that for the majority of Antarctica’s residents, they are the delicacy of choice. Krill forms a significant proportion of the diet of many Antarctic species including whales, seals, fish, penguin and squid. So much so that it is believe over half of the annual krill population is consumed by other species, ouch!

One of the reasons that krill are so sort after is that they make daily vertical trips within the sea and so provide food for both surface and deep water predators every 24 hours.

A drop in krill population can have a huge knock on effect on the Antarctic’s ecosystem. Temperature changes in 1998 wiped a lot of the single celled organism the krill feed on resulting in a drop in their population in the Bering Sea. This had a knock on effect of seeing a huge shearwater population drop in the region and was thought to have contributed to the salmon’s failure to spawn that season.

I hope this article has shed light on the importance of krill. As you can see, although small in stature these little fellas offer a MASSIVE contribution to the world in which they live in.