Pebble is a super island and we wish we had more time there. The Pebble Lodge is also a great place to stay and the owner, Ricky, with his team, is a perfect host. This morning, we took another Land Rover trip and the image above is a really typical island scene, penguin, sheep […]

Pebble is a super island and we wish we had more time there. The Pebble Lodge is also a great place to stay and the owner, Ricky, with his team, is a perfect host. This morning, we took another Land Rover trip and the image above is a really typical island scene, penguin, sheep and geese, all in the same scene. We also went up to the HMS Coventry memorial and then down to see the wreckage of an Argentine Mirage, one of three shot down over the island by RAF Harriers in 1982.

All too soon, we had to be back at the airstrip for our flip to Sea Lion Island. This was all the way from north to South and we picked up and dropped off locals at Port Howard and Shallow Harbour on the way. Met by the very pleasant Carol at the Lodge; lunch and the straight out for a ride, surprisingly, cross country in a Land Rover (!), this time with new friends we had already met at Carcass and a young mother from Stanley who had come for a long weekend with her 19 month old son. Lots of stops to look at small birds in the undergrowth, including plovers with their chicks. Then on to the HMS Sheffield memorial, which also happens to be on the cliffs where there is a massive rockhopper colony – even though we have seen so many now, they are still so fascinating and endearing.

Back to the lodge for tea – as usual with lots of home made biscuits and cakes and then out for a walk.

We have seen so much wildlife over the last couple of days, but this afternoon was just wild life central! Across the field from the lodge dodging the Magellenic penguin burrows and on to the beach where there were scores of elephant seals, with the bulls every now and then challenging each other with loud roars and charges along the beach with the dominant male chasing the loser into the surf. Then watching fascinated as Southern gain petrels tore at a dead seal pup and then, gorged, had to run along the beach to to make flight. Turkey vultures fighting for their share too and cara caras waiting in the wings for scraps. Between the beach and the dunes were little islands of nesting gentoos, maybe a hundred or so on each with little groups of messengers waddling in between them. In the dunes themselves were the ubiquitous geese and the occasional sea lion. We moved across the headland to another beach, also crowded with penguins, elephant seals and birds and looked out to sea and there was a pod of about eight orca, hunting the swimming penguins. They were a way off shore, but really clear in binoculars. These were unlike other orca I have seen; more yellowy brown & black in marking than white & black- one big male even had white markings to the front of his body and browny ones to the rear. Just stood watching for ages, every now and then distracted by male elephant seals charging into the surf in front and to the side of us and by penguins darting along in the shallows. Never seen so much wildlife all in one place. Walked back in the fading light, being careful not to damage the entrances to Jackass penguin burrows. Warm, welcoming lodge and good dinner in pleasant company. 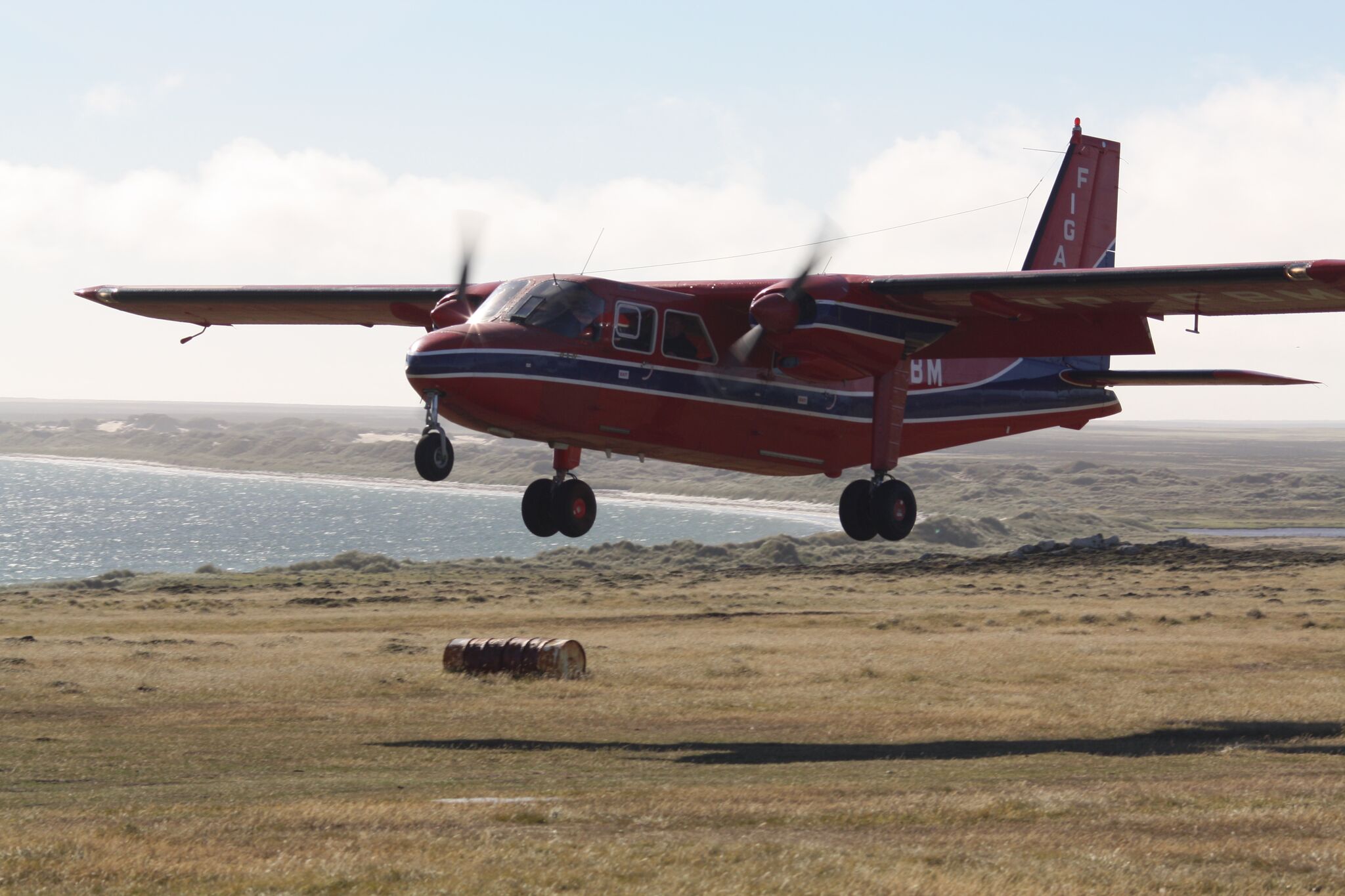 Because of the FIGAS flight pattern, early pick up in the morning for short flight to Bleaker Island.

Find out more about the Falklands here

Check out all our trips t the Falklands here