Earlier this week we heard from Dawn and David Wilson as they were about to set off on an epic Antarctic cruise. We’re glad to report that the couple have got off to a great start and have sent the 2nd instalment of their adventure. This is it: Photo courtesy of nestor galina(CC Attribution) Although […]

Earlier this week we heard from Dawn and David Wilson as they were about to set off on an epic Antarctic cruise. We’re glad to report that the couple have got off to a great start and have sent the 2nd instalment of their adventure. This is it: 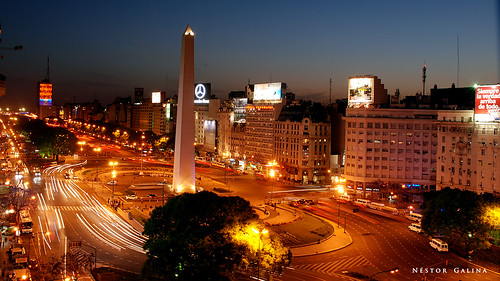 Although the major part of our trip is the Quark cruise, we decided to add a few days of R& R and to get acclimatized.  Plus we had heard from a number of people that Aerolineas Argentinas could sometimes be a little ‘delayed’ and that it would be better to ensure arriving at Ushuaia in time for the ship to leave at the very least!

Hence we find ourselves in Buenos Aires for three days.  Acclimatising is, in the circumstances, an interesting concept- for the time zone it is perfect, Argentina and the Antarctic are three hours behind the UK.   Not a huge difference, but enough to cause some confusion to the brain at bedtime. And so spending a couple of days getting into the right time zone is helpful. As for the climate nothing could be further from what we expect to face next week.

At the moment Buenos Aires is in 30 degrees of heat and somewhat humid….having packed for the ice, most of our clothes are at the very least ‘inappropriate’! However, we have managed to put on the thinnest trousers and t-shirts we bought with us and have been managing.

We have based ourselves in the Hotel Madero, which is situated on the waterfront and makes sightseeing of the important buildings easy enough on foot. Everything here is on a huge scale.  From eight lane roads to enormous buildings.  We took in the major sights this morning and had an enjoyable lunch in a traditional Argentinian bar. The biggest challenge has been the currency conversion. We brought dollars and so have to work through the Peso to dollar to pound exchange rates to work out how much anything costs.

There are also three different exchange rates for the Peso: the official rate (at banks and in the hotels currently around 8.3 to the dollar) the blue market rate (we paid in the bar/café with dollars and got a rate of around 10 to the dollar) and the black market rate (around all the major tourist attractions and the shopping centres, people on the street offer “cambio” and will change dollars at around 13 Peso to the dollar). All rather strange and confusing – but the prices are around the same as (or slightly cheaper than) London for food and drinks.

This opportunity prior to the cruise has given us the time to catch up on reading about the trip itself.   We can now truly identify a chin strap from a Macaroni penguin and have discussed the various merits of using the monopod as a walking aid, underwater camera pole (saves getting your hands wet and cold) or for actually balancing the camera!

Argentina boasts some of the best beef in the world and hopefully we will be able to report the truth of this statement after dinner tonight!