It’s a testament to the huge array of amazing sights at Franz Josef Land that John still has many more of them to tell you about. Here, the tale of his adventure on this Russian archipelago in the Arctic continues – and our wildlife travel specialists can help you to enjoy trips like this one. […] 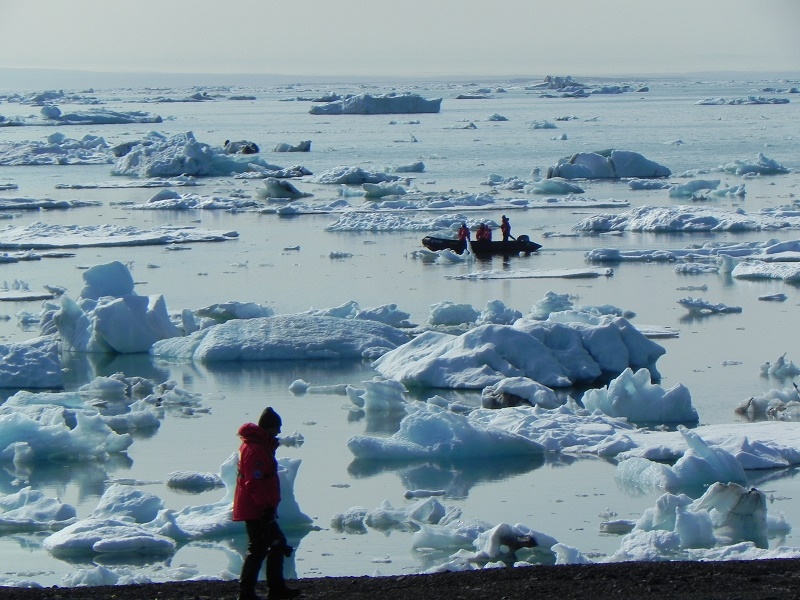 It’s a testament to the huge array of amazing sights at Franz Josef Land that John still has many more of them to tell you about. Here, the tale of his adventure on this Russian archipelago in the Arctic continues – and our wildlife travel specialists can help you to enjoy trips like this one.

Come Thursday morning, we were out early on the Zodiacs, as we were later spending time at sea and so this was to be our only excursion that day. We landed near the spot on Wilczek Island where members of the Wellman expedition overwintered in 1898/9. Wellman was an American journalist on his second unsuccessful attempt to reach the North Pole.

For reaching the shore, our landing team had cut out some steps in the ice and fixed some rope hand-holds, which allowed us to climb about 12 feet to the level snow. We walked up to the remains of the hut and a simple monument and then just wandered. There was a wide stretch of tundra peppered with lots of diminutive bright yellow Arctic poppies and small patches of saxifrage leading down to the bay on the other side of the headland. 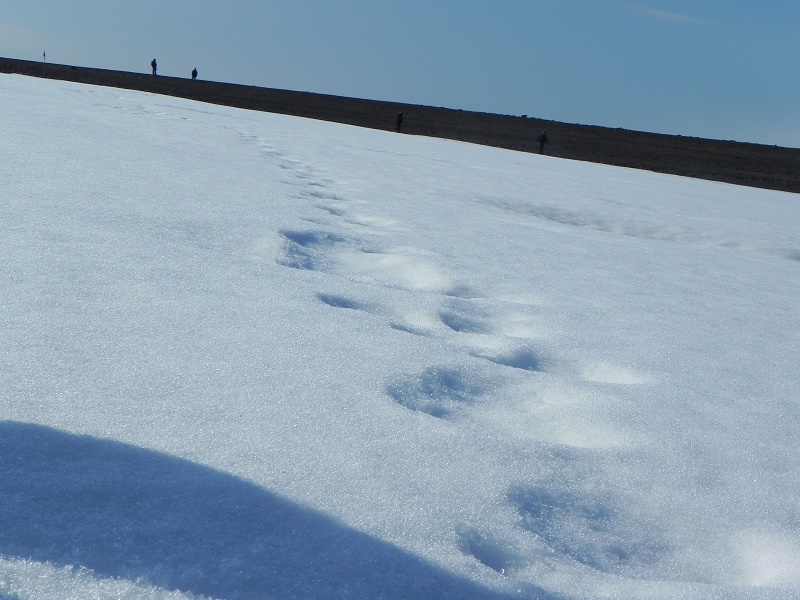 From no wildlife… to lots of wildlife

Here, it was choked with floating ice sculpted into innumerable beautiful and magical shapes. On our Zodiac return to the ship, we diverted into this field of white, gently nudging the miniature bergs and watching larger ones perform a perfect roll as their centre of gravity shifted. We saw no wildlife, apart from a few birds, today. However, there were footprints of both polar bear and Arctic fox near where we landed – I bet they spotted us! 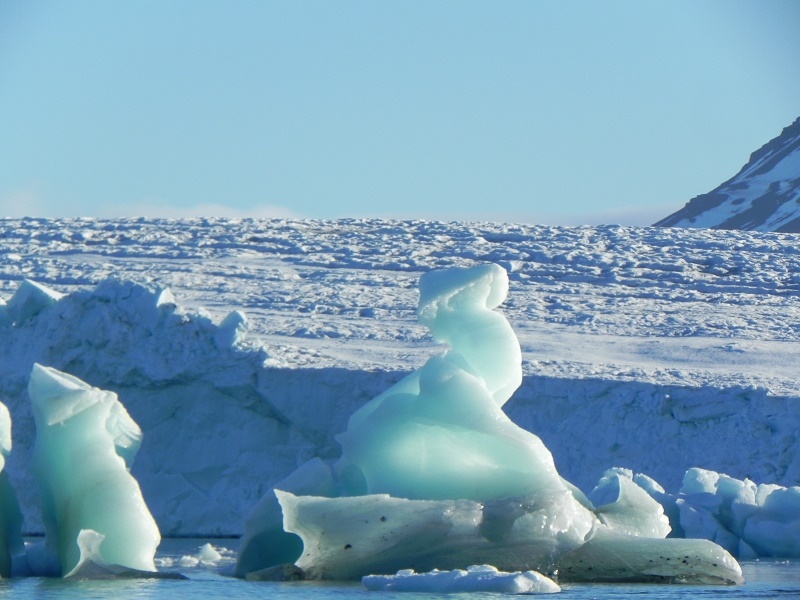 Things changed this afternoon. We were supposed to go to Cape Tegetthoff, which is especially scenic with pointed hills; however, as the advance information on sea conditions was negative, we diverted up to a small island called Matilda, where we went for a Zodiac ride and watched another polar bear and lots more birds. These were mostly little auks, Brünnich’s guillemots (for my North American readers, these are also known as thick-billed murres), glaucous gulls and common eiders. I was really pleased to also spot a pair of ivory gulls, perched right at the top of one of the bird cliffs. 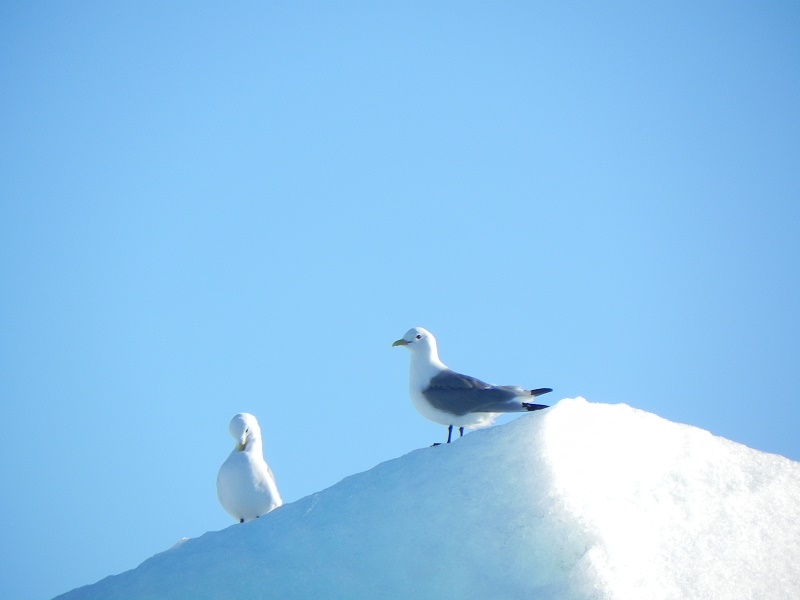 A serious problem for polar bears

This is an exceptional year for sea ice, which has receded at least a month early so that we have hardly encountered any – just a few ice locked bays. This means that the polar bears we have seen are effectively stranded since they rely on the sea ice for their principal prey, seals. 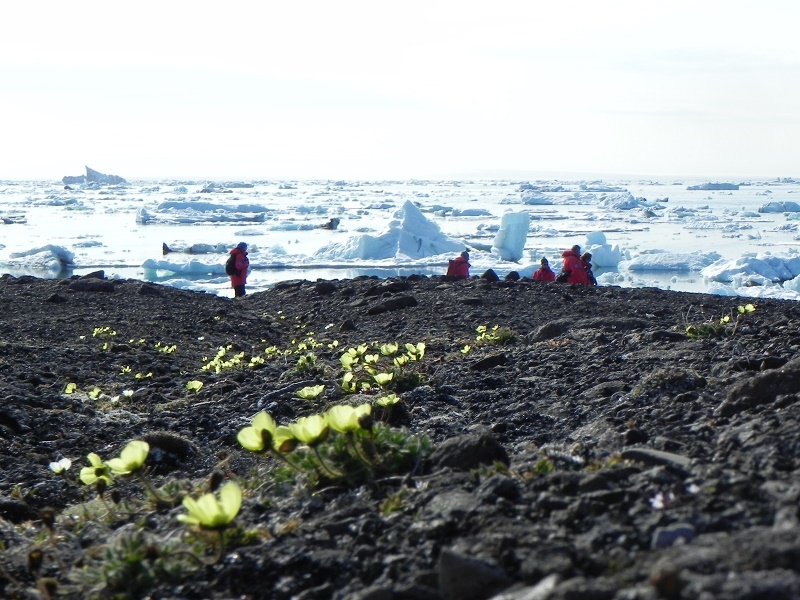 The first young bear we saw on the iceberg may not survive, because he would not have the skills to catch alternative food. The others may catch old or very young walrus or the occasional bird, but will probably struggle – and there are lots of them around. So for us, it has been good, because we have been able to access areas that would have been difficult – but the polar bears face a real challenge.