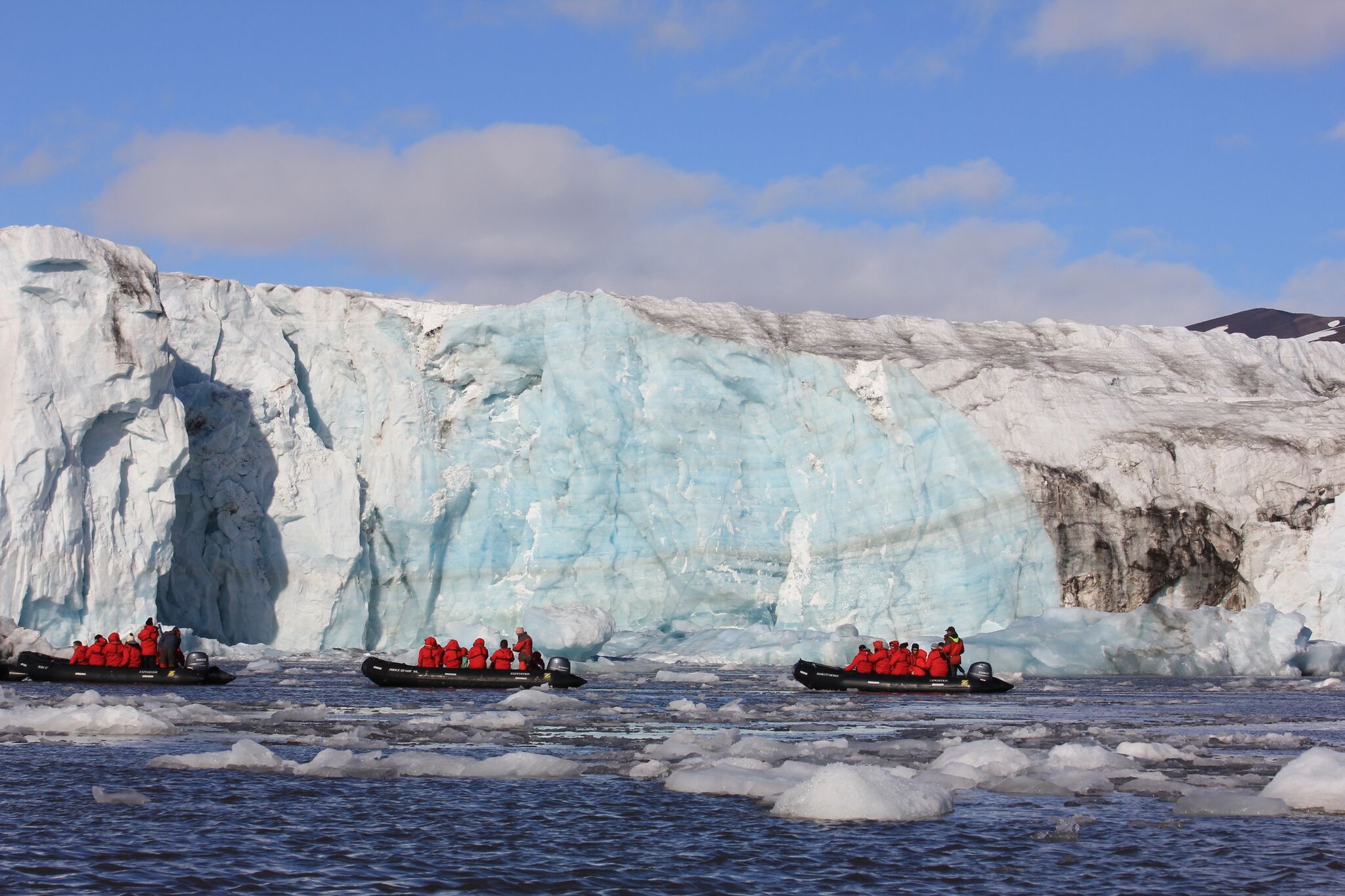 Around 10 am last night was an optimum time to see Polar bear as we passed through the straight of Freemansundet between Edgeoya and Barentsoya on the west side of Svalbard. We were not disappointed as we saw at least five bears high of the hills and clefts of the mountain side to our port side. But the surprise of the evening was a group of Belugas on the Starboard side extremely close to the edge of the side jumping and diving. The reason they spend time so far in is to avoid their main potential predictor Orca, that that you would expect to see common sightings of Orca in these parts buts it’s a learnt strategy according to a Russian research student who is studying Beluga and writing a current thesis on Beluga.

Today we are heading for Gustavo Adolfo Land which remained partly un explored and unchartered. Polar expedition vessels keep depths and chart information they have gathered over the years a secret unless shared in an emergency situation to come to the assistance of another vessel. The weather is certainly more Polar like with much more ice flow in this area and this morning we had a little snow for the first time. The wind is between 30 & 40 knots and sea conditions are too rough for landings. We planned to land to see walrus this morning after breakfast which we had to make do from the vessel and then sail on 2 hours to Alkefjellet (Mount Guilliemot). Which is where we are right now. The sea is still swelling and dangerous to cruise of Zodiacs but we have super views of the vast Brunich Guillemot colony and the dramatic towering cliffs with over 60,000 breading pairs.

As we were unable to land This morning two exceptional lectures we given. The first one by Frank Todd on The Polar Bear which was amazing from start to end. The second lecture was delivered by Paul Harris the historian on board on a brief history of Svalbard. Again, a riveting story right the way from 15 & 16 Century to the present day Svalbard and the Treaty of Svalbard.

Vikings supposedly recorded a fist sighting of Svalbard mean Edge if the Ice although it’s not confirmed this was in deed Svalbard however the Norwegians would like to think so to assist in their claim to soverenty.
It’s been the Russians who have tried in recent years to prove a claim to the archipelago by The Pomers, ancestors in 15 Century who were Russian trappers from Siberia who were funded by the Orthodox Church. This again is an unconfirmed claim and not proven 100%.

The first proven and definitive recorded sighting of the land was by a Dutch adventurer in 1596 called Willem Barents who first gave this land the name Spitsbergen meaning the land of spiking peaks. He died possibly of scurvy related illness in 1597 marooned on the Spitsbergen ice with some of his men however a few were rescued which lead to tales of rich pickings, furs, whale oil from blubber and walrus tusk.

In 1607 an English man named Henry Hudson who worked for Muscovy Trading Company started serious seasonal whale hunting and for the first time oil was created from the blubber of the whale and used for many everyday items such as oil lamps, make up, soap, lubricants. By this time the Dutch and British were the main players one nation taking the north and the other the south of the archipelago. Business and profits were good.

Did you know we nearly didn’t have an Horatio Nelson hero figure of the British Royal Navy as our history books record today? In 1773 Young Horatio served as an officer on HMS Carcass and spent time on and around Spitsbergen. Against orders the story goes he went ashore alone hoping to kill a Polar Bear to skin and take home to his father. Once ashore after finding a likely candidate he took aim with his rifle but to his utter shock his gun failed. He tried to escape the tricky situation and used the rifle but end to try to stave off the wild and possibly hungry creature and nearly came to his end until a marksman on board the ship took aim and killed the bear. So Nelson survived to fight another day! This period in Nelson’s naval carrier isn’t as well known as his Trafalgar days.

Find out about our arctic expedition cruises here

Check out trips to Svalbard here