Investigation opened after illegal removal of Narwhal tusk in Svalbard

We were saddened to receive the following email from the Association of Arctic Expedition Cruise Operators (AECO) recently detailing the illegal removal of a Narwhal tusk at Svalbard: The Governor of Svalbard has opened investigation after a narwhal tusk has been illegally removed from a skeleton close to Rubypynten in Rechercherfjorden. This has probably happened […]

We were saddened to receive the following email from the Association of Arctic Expedition Cruise Operators (AECO) recently detailing the illegal removal of a Narwhal tusk at Svalbard:

The Governor of Svalbard has opened investigation after a narwhal tusk has been illegally removed from a skeleton close to Rubypynten in Rechercherfjorden. This has probably happened late July or early August this year.

The Governor would appreciate any information that can shed light in the incident. If you have relevant information (e.g. when did you last see this tusk) – or observation that might be of help for the investigation, please contact us… 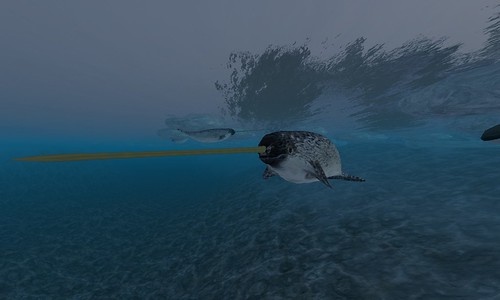 The unicorn of the Arctic

The narwhal – or narwhale – lives all round in the icy seas of the Arctic feeding on flatfish, Arctic cod and Greenland halibut.  You’ll know instantly if you’ve seen one as their distinctive tusks often lead to them being called the unicorn of the Arctic.

The tusk is actually a large tooth and it’s only the males who have them. Once they reach maturity, the tusk keeps growing throughout their life and can reach up to 3.1m in length. Tusks are used to establish hierarchy and dominance in much the same way as a male lion uses its mane or a peacock its feathers. There are recorded examples of occasional fights with tusks and of narwhals using their tusks to break ice to create breath holes.

Sadly, these wonderful whales are on the endangered list. And it’s humans who have put them there, mainly through hunting. Estimates place the number of narwhals in the wild as around 75,000. Only the Inuit people are allowed to kill narwhals to use as food. They use all of the creature, eating the majority of it and making tools and works of art out of its bones. Narwhals are also said to be susceptible to climate change, pArcticularly the reducing levels of sea ice which has made them easier to hunt. Scientists and conservationists are calling for quotas to be introduced on hunting to help preserve numbers.

Since 1972, it’s been illegal to remove a tusk from a narwhal’s body or skeleton, in much the same way as trading ivory has been outlawed. But the practice still exists as tusks are rumoured to fetch up to $30,000 each in the US, and some reports reckon that smuggling rings have illegally extracted and smuggled up to 150 tusks in the last 10-years. Vikings and other northern sea traders of the past believed narwhal tusks had magical powers and could neutralise poison, so they would sell tusks for large sums of gold. It’s also rumoured Queen Elizabeth 1st was given a bejewelled tusk by Sir Humphrey  which was worth £10,000 (around £1.5m in today’s money) during her reign. There are also many literary mentions of narwhales, including Moby Dick and Ten Thousand Leagues Under the Sea.

We urge anyone who may be able to help in the Governor’s investigations to come forward. Please call us in confidence on 0800 678 5237 and we’ll pass your information on to the AECO.